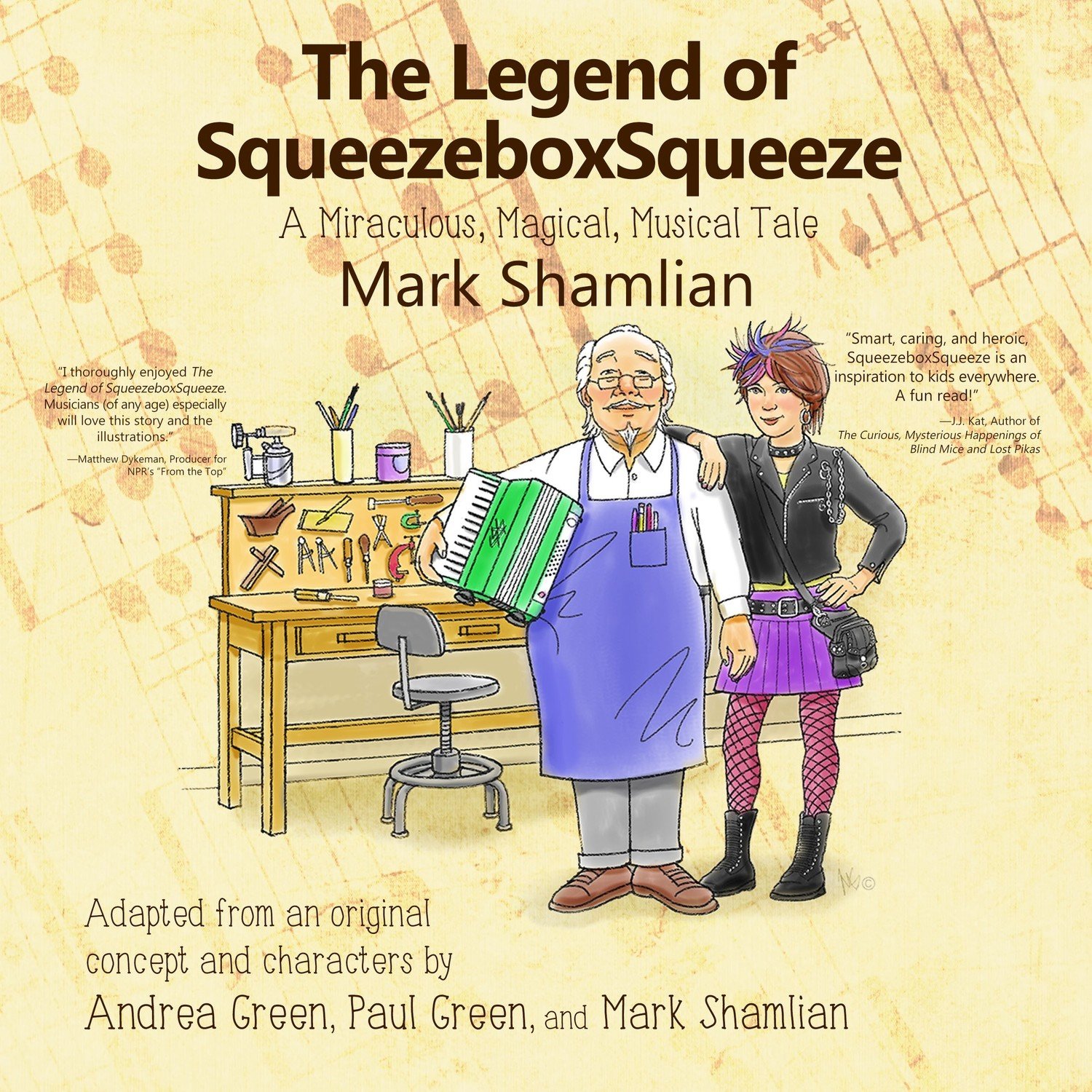 The Legend of SqueezeboxSqueeze: A Miraculous, Magical, Musical Tale by Mark Shamlian

The Legend of SqueezeboxSqueeze: A Miraculous, Magical, Musical Tale

written and illustrated by Mark Shamlian

Will Cheng Lee ever be the same after he's taken on a wild, miraculous, earth-shaking adventure by the unlikeliest musical superhero?

Cheng Lee, former inventor, physics professor and one-time pioneer in quantum-mechanics owns an accordion shop in London, England where he works as an instrument repairman. His business is failing, his beloved wife has passed, and he may soon be evicted. Now old and broke, all seems futile for Cheng.

One morning a small package arrives, launching the shopkeeper on a crazy, magical journey. It’s not all easy, though, and Cheng is faced with some hard decisions. When a constable knocks on the shop’s door, his world is turned upside down. He’ll need more than luck to get out of this precarious situation.

Along the way, Cheng, his apprentice, and a group of magical, musical cohorts learn the meaning of loyalty, faith, and heroism and the power of believing. But what will this new perspective do to Cheng Lee?

AUTHOR BIO
Mark Shamlian, freelance illustrator, portrait painter and designer resides in a semi-rural area outside of Boston with his wife, Gina. With his debut novel The Legend of SqueezeboxSqueeze, he combines his love for illustration, music and writing. When not engaged in the creative process, he lives an unremarkable life, enriched by various hobbies, humans and animals. For more info about Mr. Shamlian, visit shamliandesign.com or find him on Facebook.

CREATOR BIOS
Londoner Paul Green has enjoyed music since early childhood. Over the years, he has studied trombone and accordion, performing in various bands, orchestras and ensembles. Mr. Green’s love of music and its unique powers inspired the idea for SqueezeboxSqueeze and friends, a band of colorful, musical characters whom he hopes everyone will delight in.

Andrea Green is an award-winning composer, playwright, theater director, musician, educator and music therapist. She is internationally known for her Broadway-style musicals that foster inclusion, understanding, acceptance and respect between children. Her work is the subject of the 2015 Emmy-award winning documentary “On the Other Side of the Fence” and received the United Nations Department of Public Information Bronze Award. Ms. Green was honored in 2012 with a Proclamation from the City of Philadelphia for her work teaching tolerance through the vehicle of her musicals that “take down fences and build bridges between people.”
Save this product for later
Display prices in: USD